There are two known swords that belonged to Edward III (of England). One extant and the other is currently displayed. The first was his battle sword. This weapon was of the Straight Sword variety and was 48 inches long. It possibly weighed 3 pounds. The roundel/pommel was large, with a Lion of England insignia (of England) on one side. The reverse was a jewel. This would have been the blade Edward III carried during The Battle of Crecy in 1346. A few portraits of Edward show this type of sword. What happened to it is a matter of debate. Some say it was lost or stolen during The English Civil War.

Edward's second known blade, was his ceremonial sword. Of the Longsword classification of blades, it measures 6 feet 8 inches long! Although a possible "battle blade", there is no recorded records of Edward using it in combat. This blade was the one used to install the first Knight of The Order of The Garter (established by Edward) It is currently on display at St. George's Chapel, Windsor Castle, England. 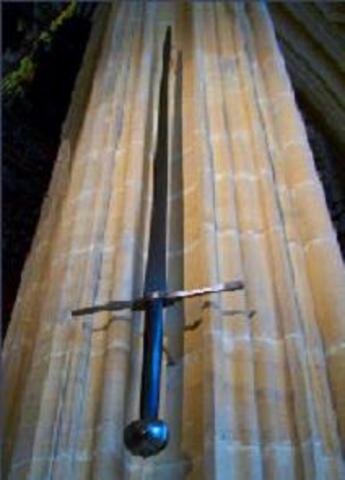