These types of small cannon weapons, were designed to be mounted on rotating swivel platforms. This gave the cannon a 360 degree range of deployment. Most popular on fighting ships (such as the Swedish “Vasa” or English “Mary Rose”), cannons using the Swivel mount rarely went over 5-pounds. The Swivel design would allow even a small two-man vessel the ability to render heavy damage to an attacker. Not used as a primary shipboard damage weapon, Swivel Guns were more effective as anti-personnel weapons. As the need for larger cannon was employed, most Swivel Guns were replaced (although some did manage to be maintained on Skiffs and Boarding Boats), well into the early 19th Century. 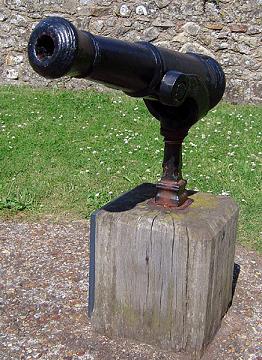