An unusual ranged weapon that derived from Switzerland around the 14th Century, the aptly known “Swiss” Arrow – was based upon the more ancient Kestros and other similar weapons. The Swiss version was in essence a large arrow shaft. On average, these were 2.5 to 4-feet in length. The arrowhead was designed to be more slender (tapered), and was sharpened on all blade perimeters. The shaft itself (wood) was augmented with smaller sleeve weights. The end of the shaft featured somewhat longer and larger stabilization feathering.

The skilled thrower would deploy The Swiss Arrow very much the same way as a small Spear. The key to successful deployment was in the angle of trajectory. The higher arc thrown, the farther (and harder) The Arrow would fall. In capable hands, an Arrow could penetrate .06-inches of Armor. Used by Light Infantrymen, they were common with The Swiss until the rapid deployment of early Firearms. Still seen today, The Swiss Arrow is now used in Sports competitions. 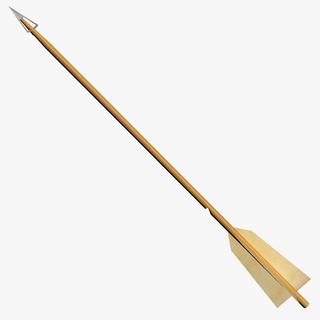