''Supporatsse'' was a Tudor Fashion style (16th to 17th Century AD), characterized by exaggerated and overly high stiffened collars, applied to feminine forms of dress. Seen in the beginning of The Tudor Era, they would continue through The Elizabethan Era. These collars, made of silk and fine cloth – often very embellished with bead and lacework, was made to ''stand up'' by a process known as Supportasse.

The process involved placing stiff wiring (often concealed by beadwork), throughout The Collar. These wires would be formed into wide shapes and allowed for the material to remain rigid. Some Supportasse could be as ''high'' as 2-feet to as wide as 3-feet. England's Queen Elizabeth I was a great Patron of some of the most elaborate Supportasse Collars of The Era.

Gold, Silver and extravagant jewels were often fitted into the material, which was likewise stiffened. Supportasse is often misnamed ''Ruffs''. By the 18th Century, Supportasse was discontinued when other fashion took dominance. 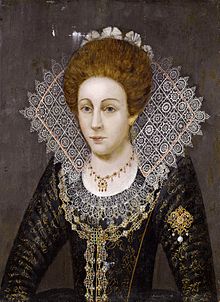