Of 14th Century Russian design, The Sulista Spear may have had it's origins from The Rus exposure to The Hun Hordes (who used similar weapons). In construction, The Spear was solid iron or composite metal. The Shaft was forged hollow to provide a form of aerodynamics when thrown. Spearheads were known to be of different shapes and styles, but most followed the design of a long, sharp and tapered  tip.

Otherwise unadorned, The Sulista Spear was around 5-feet long (with some smaller versions known to exist). They were carried in Quiver Sacks of between 5 and 10. In deployment as a Melee weapon, several hundred Sulista Spearmen would be massed  in a standard battle line to the front of an Enemy. With a "running start", these men would throw their Spears very much the same way as a Greek Javelin. "Loosed" high in the air, the natural weight would increase downward velocity. The tactic was likened to  "cloud of spears". Highly effective for breaking up both mounted and dismounted troops, The Sulista Spear never took hold as a primary assault weapon. With the advent of crude firearms, they all but vanished. 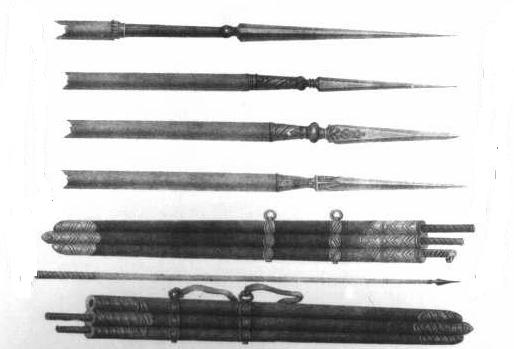