Carried by Roman Legionaries (2 for each man), The Sudis (or “Camp Stake”), was required to create an immediate Palisade – around which a Roman Camp (or Castra) would be established. Other variations of the term “Sudis” was the “Pilum Murale” (related to the standard Roman War Spear, of which it resembled). Oak was normally chosen for construction (due to it's hardness). Pointed at the top and bottom of the stake, holes would be dug at intervals, after which The Sudis would be placed in a circular or rectangular pattern. The average length of The Sudis Stake ranged from 4 to 5 feet in length). In some cases, The Sudis was erected in an angled position, as a means of “Shield Wall” for defense against enemy attacks. The Sudis would eventually evolve into The Cheval de Frise (wooden) field defense system seen beginning in the 15th Century. 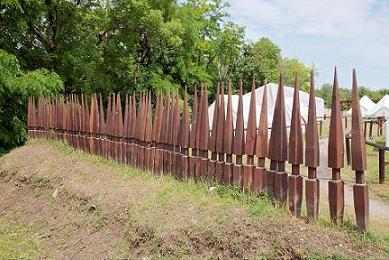