Although the term "Stratioti" (Stadiot), has quite different meanings, all are linked to a type of "Professional Solider" or Mercenary Class from Greece, Albania and The Balkan States. It us theorized that they were possibly Greek transplants to Central Europe around the 10th Century. By the 15th Century, these Stratioti had earned a name for themselves as excellent Light Cavalrymen, hired out to Rulers and Nobility. Mostly used as "Frontier Troops", these Forces were tasked with patrolling outlaying areas and Regions in-between Kingdoms. The Stratioti were also used to Garrison Fortifications. By the mid-16th Century, most European Nations had recruited a form of Stratioti.they were most noted for their "Feigning" and "Hit and Run" Tactics.

Some Stratioti were noted for their almost "Turkish" Dress style of bright colors. Others adopted the style of the Region they worked in. Albanian Stratioti were noted for their imitation of the dress of The Winged Hussars. They used a wide variety of different Armor component types. Chain Mail and various Gambeson-types of Coats were also used. Some Balkan Stratioti wore a high pointed (conical) "Gentlemans Hat". These stiffened black hats became an almost "psychological" impact on their Enemies. The Stratioti by and large, had a standing and grisly Order that further established their reputation as "fierce" and "ruthless" Fighters. Although paid, Stratioti were given a Ducat for every Enemy "head" delivered to their Commander, as a type of "Incentive Pay".

With the advent of early Gunpowder and Firearms, The Stratioti were among the first to use them in combat. They were adept with a variety of Swords, Spear and Shields. With the 17th Century, most European  Armies had become more standardized and professional. The need to hire standing Armies, and The Stratioti - would cease. 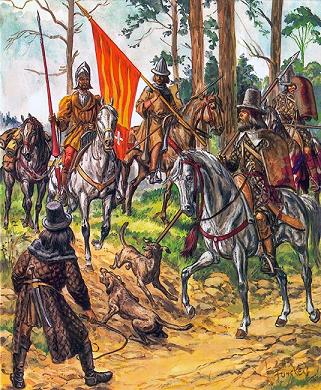