Concern over any resistance from The North Vietnamese Air Force was considered null. At best, The NVAF only had 200 at best Fighter Aircraft (mostly obsolete Soviet 1950s MIGs). The South Vietnamese Air Force did not have the available Air resources to maintain a constant Bombing Campaign. Still, their American trained Pilots, using American Aircraft – were of some use. A series of 15 to 20 Air Bases were built throughout The South from 1965 to 1967 to accommodate future Bombing Operations.

The Strategic Bombing Policy was a time tested Plan. Refined during World War II and The Korean War, a critical component was the B-52 Stratofortress Heavy Bomber. Using a tactic known as “Saturation Bombing” (aka “Carpet Bombing”), this involved Squadrons of Bombers dropping Ordnance in specified grids. The distance used was several hundred yards of strike zones. In this, a square miles of terrain could be effectively destroyed  (with any Soldiers and Military assets as well).

One of the largest Bombing Raids committed was known as Operation: “Rolling Thunder”. Began in 1965, it ran until 1968. It involved thousands of Aircraft. An estimated 12,000 Missions were flown against The North. An estimated 180,000 Enemy casualties were listed, with over 60 Million (USD) in assets damage. American losses were 922 Aircraft, with over 1,000 crews killed and captured.

843,000-tons of Ordnance was dropped which equaled the total amount deployed in World War II. Despite thus, Strategic Bombing was seen largely a failure. Many factors were considered. First, the Tunnel Systems used by The Viet Cong were exceptional with regards to Troop survival during Bombings. As a result of them, any losses sustained on the main supply route, the infamous “Ho Chi Minh” Trail – could be minimized.

Another factor was the lack of “Total War” being waged against The North’s Capital, Hanoi. Bombing runs often fell short of attacking The City, which was heavily defended by Surface To Air Missile (SAM) Batteries. Any attempts against The City were met with stiff resistance  (despite numerous attempts to destroy them). There were other Strategic Bombing Operations launched until 1972, on a smaller scale. However, with the War sentiment in America radically against involvement and the collapsing South Vietnamese Government, Missions ended in 1974. 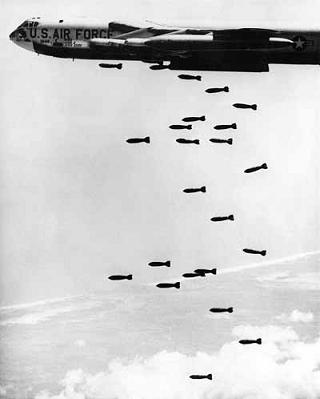