One of the largest and historically important castles in Scotland, Stirling Castle is located in Stirling, Scotland. Structurally identified as a Hill Castle, an earlier defensive structure was built on the solid quartz plateau in the 3rd Century A.D. Roman invasion documents identify such a structure (although they bypassed the location and did not rebuild on it). Stirling as it is known today, began around 1110. Featuring 4 “levels”, the Perimeter walling was designed to enhance the natural hill formation. In some spot, the defensive wall is between 6 and 10 feet thick. The Lower Level (ground), featured a massive Guardhouse/Entry Point. This point led to the Secondary “level”, which featured a defensive wall system around 15 feet thick – and featuring several Defensive Turrets. A road led to the Third “level” and another large Gatehouse.

The Upper or Primary Courtyard opened to a large Manor House/Keep structure. By the 12th Century, Stirling became the seat of power for The Scottish Kings and Queens. Stirling figured prominently in The Wars For Scottish Independence, serving as the launching point for the many invasions against England (coordinated by famed Scottish Rebel William Wallace). King Edward I (England) ordered 17 siege engines be constructed to besiege Stirling. Not effective, he used his “legendary Monster” Siege Engine “Warwolf” (the largest siege engine ever built) – against Stirling. Used only once, “Warwolf” was said to have completely destroyed the Second Gatehouse – completely with just one shot. Residence of The Bruces of Scotland for many years, Stirling fell under control of The Stewart Family. Under the reign of James III (Duke), he developed an artillery Foundry at Stirling. Many hundreds of cannons were produced (with many being incorporated into the castle's defenses).

The famed Battle of Bannockburn (1488), was fought very near Stirling Castle. With the reign of the later Stewarts (James IV to James VI), Stirling underwent major renovations. A Royal Palace was constructed as well as other support structure. In 1501 (with Vatican approval), a College of Cardinals was erected. Mary of Scotland was installed as “Queen of The Scots” - at Stirling Castle in 1543. Several Royal Chapels were constructed at this time as well. With the eventual Union of The Crowns in 1603, Stirling become a military structure and The Royal Palace was closed. A Royalist stronghold at the time of The English Civil Wars, the garrison surrendered to Oliver Cromwell's Forces with conflict. Stirling Castle was again pressed into service during The Jacobite Rebellion (1688-1746). Help by Royal Forces, The Battle of Sheriffmuir was staged from the castle. Falling under Government control, Stirling served as the Headquarters of The Argyll and Sutherland Highland Regiment from 1800 to 1964. A Military Prison was constructed in 1810 (and held many French prisoners from The Napoleonic Wars). Queen Victoria also visited Stirling in 1842. With renovation work still on-going, The Royal Palace is completely restored and hold several Museum of Medieval and Renaissance Art and Armories. 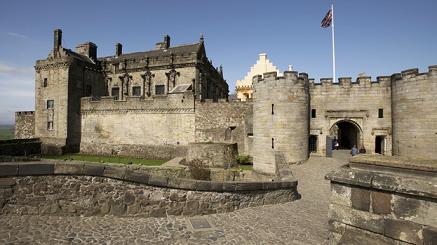