Whereas the Front of a Vessel is The Bow, the Rear is known as The Stern. Used commonly with the related nautical term “Aft”. A Ships Stern was often most the most reinforced part of a Vessel. Since ancient times and the beginnings of Ship Building, Sterns were traditionally Square shaped. However, when Artillery became common place with Naval Warfare, it was quickly determined that a more rounded shape was better for protection from cannonball.

There are (2) known Stern patterns used. The first, known as the previously mentioned Square (or Transom) and The Elliptical (or Fantail) Design. The evolved Elliptical became the norm for pattern building around the 16th Century. During this Era, Sterns became taller and broader – and often very elaborate in design. Most building patterns required no less that 17 different “cross patterns” of wood placement (again designed to heavily reinforce a Ship’s Rearward compartments).

The Captain’s Room (or Quarters) was most often located at The Stern section of a Ship. In addition, as is tradition, The Ships name was placed on The Stern as well. Above The Stern was located The Stern Post, which was a wooden Spar (Pole) – from which hung The Stern Light. This was a simple Lantern (later Light), from which to serve as a Navigational marker to other Ships at Sea.

With the evolution of Ship Building, an additional 5 other Stern designs were added to a Builder’s Patterns. These are: The Compromise Stern, “V” Stern, Round, Torpedo and Canoe Stern. 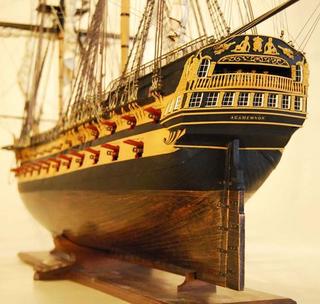