Standard of Charles The Bold

The last of The Valois Dynastic Duke of Burgundy, Charles The Bold ruled Burgundy from 1467 to 1477. A rash but effective Ruler and battlefield Commander, his goal of uniting Brittany with Burgundy  (with the ultimate goal of establishing a Valois Monarchy), was almost realized. Had it not been for his death, leading his Armies at The Battle of Nancy in 1477 - he may just had achieved it. His Standard reflected his goal as well. Quartered, the Upper Left and Lower Right Canton featured The French Kingdom symbol of The Fleur-dy-Lys (in Gold, against a Blue Field). The entirety of which wad bordered in Red and White.

The Upper Right Canton featured The Valois Heraldry of a Gold Lion against a Black Field.Next to which featured the Blue and Gold Stripes of Valois. The Lowe Left Canton was similar, featuring the Red Lion of Burgundy, set against a White Field. The Valois Stripes were duplicated again. Finally, a Black and White Lion was superimposed in a Gold Shield in the center. This was in relation to the Unification with Brittany. The Standard did not survive the battle, with information of it's construction and design coming from contemporary sources. 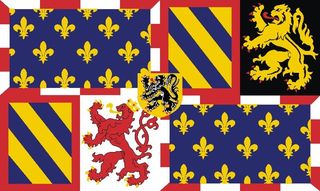