The ''Standard Bearer of England'' is a position of great Honor, created in the 11th Century AD. The Title is also closely associated with The ''Royal Champion'' (Titled ''King's'' or ''Queen's'' depending on The Reign). The Position went to the accepted and most trusted Noble (Knight) of The Realm. The ''Champion'' was sometimes One who defended The Royal Honor, if threatened or disgraced.

On a Battlefield, when Royalty was present, The Noble would be mounted and carried the Personal standard of The Monarch. These were modified Pennons, which each Monarch had to represent themselves. These ''Standards'' were not Kingdom, House or National Color Bearers. They were armed, so as to defend The Standard. Eventually becoming an Honorific Rank, it was last used with The Coronation of Queen Elizabeth II in 1953. In a change of protocol, The Standard Bearer bore The Union Flag for The Queen. 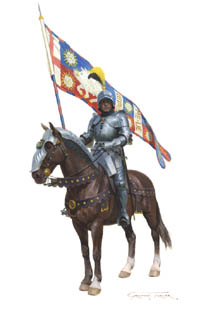