Launched from England in 1839, The Schooner ''SS ''Archimedes'' was the World's first Steam Powered Screw propelled Vessel, and the first such to cross The Atlantic Ocean (England to New York). She would also serve as a ''template'' for famed British Inventor Isambard Brunel's massive Ship SS ''Great Britain'' (built in 1845). During Her 20-year career as a cargo transport – as well as a ''small'' Passenger Ship, The ''Archimedes'' was crewed by 100. She was 125-feet in length and stood (beam) at 23-feet. The ''Archimedes'' still maintain a Sail propulsion patter of (3) Masts – despite her steam-coal primaries. She could achieve 10-mph in open Sea.

Sold in the 1850s, a catastrophic fire at Sea destroyed the Vessel;s Hull. Although lost of life was reported, it took great frats to get The''Archimedes'' to a safe Port. She would be sold to a rival Commerce House in the 1850s. It is assumed she was later broken up – whereas Her History ends without a trace. The British Museum Ship SS ''Great Britain'' (docked in Bristol) is a lone surviving example of what ''Archimedes'' looked like. 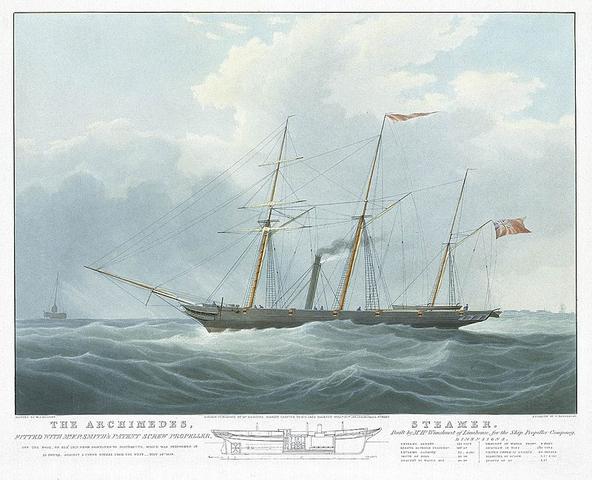