Spur Castles were designed to incorporate the surrounding geography as part of it's outward defenses. The name "Spur" derives from the natural extension of a hill. Spur Castles relied on defense from three sides. Their primary weakness was where the spur joined the existing mountain or hilltop. This prompted the construction of a "Neck Ditch" or digging a cut to separate the Spur from the mountaintop. Often, walls and Towers were incorporated into the natural terrain in an attempt to maximize protection. Spur Castles were designed into Wards for better control and defense as well. Most siege equipment were not effective against the Spur Castle design. Krak de Chevaliers and Monfort Castle are classic examples of Spur Castles. 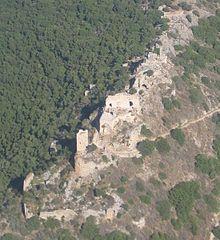