With the advent of the Wool Trade in the 13th Century, the job of converting such material into workable portions was the job of a Spinner. Originally using a rotating “Spinning Stick”, this would quickly evolve into a device known as a “Spinner's Wheel”. The goal was to turn raw wool into yarn (for sewing and construction of clothes). A Spinner was a vocation ONLY held by women. Men could NOT be Spinners. Often a woman worked from Sun up until Sun down (just to produce enough yard for a single pair of clothes). Spinners were regularly employed by Manor Lords and Castle Lords. Having a Spinner was considered a valuable commodity. From the Spinner, would develop the well-known term “Spinster” (an old, unmarried woman). It was thought, that spending so much time Spinning, a woman would have no time to find a husband. When her “dexterity and eyesight” failed in old age, her chances at “love” were null! 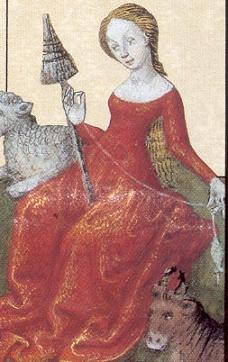