The marriage of a battle knife and other related “sword-like” defensive/offensive weapons needed on the battlefield would eventually lead to the creation of the bayonet. This rifle barrel mounted blade would become the mainstay of nearly all infantry forces throughout The World. Various models and types were experimented with. The Spike Bayonet, so named for it's triangular shape, was mounted on the end of a rifle or musket via a barrel hole (which allowed the Bayonet to be slipped over the barrel). This still allowed firing of the weapon with the blade firmly locked into place (via a metal slide lock). Sometimes referred to as a “Pig Sticker”, The Spike Bayonet would prevail in warfare for many hundreds of years. Ranging in length from 15 to 20 inches in length, they were made of an iron-steel composite. They would be carried in a Bayonet Scabbard on the soldier's belt (when not in use). 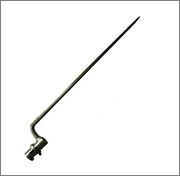