An ancient tactic which perhaps developed with the origins of the basic Spear itself, The ''Spear Jump'' has no set Country of origin. It did require physical abilities and training to deploy. Some of the earliest examples are depicted on Ancient Greek earthenware and mosaics. It was possible taught to ''Front Line'' Hoplite Units as a tactic designed to break an initial contact with an Enemy Line of related Spearmen.

In application, a Spearman would be required to counter an initial thrust by an Enemies Spear Thrust. Most ''War Spears'' traditionally ranged from 8 to 15-feet in Ancient Greece (with the exception of The Sarissa, which was a Phalanx weapon). Upon closing the space to the immediate front, a Warrior would initiate a leap of 3-feet. The foot of the leg (either Left or Right, and non-leaping appendage) – would be placed in contact with the Spearhead of an Enemies Spear. Bringing int down with force, The Spear would be pushed away or brought down in such a way as to expose the Thruster to The Leaper's equally poised Spear. Consequently, The Leaper could apply a ''downward thrust'' to a thus exposed Enemy Combatant.

The tactic was also applied in tandem with a variety of Shield defensive/offensive tactics. While the Spear Jump was not emulated by Ancient Rome, examples were used by The Norse and later Saxon Spearman of the the 8th to 11th Centuries AD. 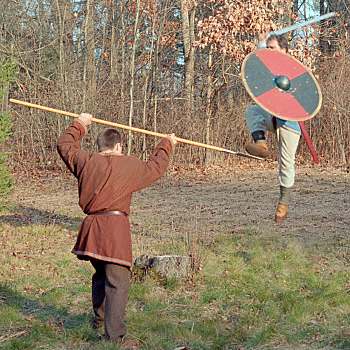