A variant of The Norse Dane Axe, the 13th Century Sparth Axe was a hand held War weapon common with The Galloglass Warriors. An elite Warrior Class of The Norsemen, they were seen as Mercenaries who would eventually settle in Scotland. The Sparth Axe would become adapted into several forms of Scottish weapons. The Sparth Axe featured a broader Head blade than The Dane Axe, with a sweeping, rearward design (or recursive). The lower portion of the Axe head was longer that the top portion. Mad of forged iron, this head was placed on a traditionally long handle (made of wood). These shafts were roughly 5 to 6-feet long. Some variants designed featured a smaller striking head, which may have been adopted after The Galloglass had settled into Northern Scotland in the 14th Century. 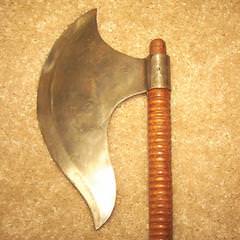