The Walloon Guard were formed in 1703, under commission of King Philip V of Spain. Soldiers were recruited from foreign Countries (The Netherlands, Germany and Sweden). They were used primarily as spearhead and rear guard troops. The Walloons were linked historically to The Scottish Guard (another Spanish-formed Regiment). The Regiment was modeled after The French (in uniforms and equipment). Officers of the Regiment could only be Spanish. Most soldiers, upon completion of their enlistments - remained in Spain or joined the Regular Spanish Army in other Regiments (many non-Walloon Units were pleased to have such trained soldiers). The Walloons served for a time as a type of National Police, used to quell civilian revolts. Their tactics were harsh and brutal and many advocated for their disbandment. The Regiment served with distinction in The Peninsular War. The Walloons were disbanded for a period after the fall of the Monarchy, but were reconstituted in 1814 upon the Kings reinstatement. In 1818, they were renamed The Royal Guards of Infantry. By 1824, all foreign recruits were banned (making it strictly an all Spanish volunteer Regiment). 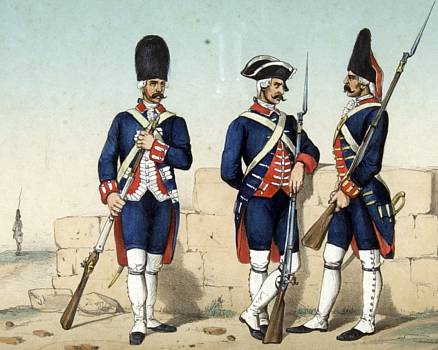