The 13th Century Spanish Jinete were the dominate form of Light Cavalry, deployed against the Muslim Incursions - which would lead to The Reconquista Period. The Jinete were considered an Elite Fighting Force that used the "Feigning" Tactic as their primary attack style. In this, a Force engaged it's Enemy, then immediately retreated. This gave the impression of having been defeated. Giving pursuit, the Enemy was was then turned on by the retreating Force and destroyed away from the safety of their Lines.

The Jinete were known as Light Cavalry, but carried multiple weapons and used various forms of Armor. They used The Javelin, Sword and Shield. At their height, The Jinete numbered some 13,000 Troopers. Much of them were drawn from the existing Military Orders of Santiago, Calatrava etc. As such, they were already well versed in combat arms. Often, Jinete were deployed without Horse, to Garrison Fortifications and Castles.

Typically, The Jinete used Chain Mail as an undergarment protection, over which various Breastplates and Cuirass were used. The Naval and Barbute Helmets were popular, as was their adaption of their Enemy - The Moors Boardbil Helmet (which afforded much better visibility). Still in existence by the 16th Century, the Jinete were the evolutionary forebearers to the later Spanish Lancers. 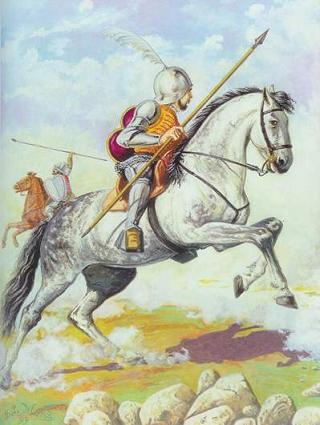