The Portuguese built Galleon “San Marcos” was commissioned 1570 by King Philip II (Spain), and was the “Second Command” Ship of The Spanish Armada that attempted to invade England in 1588. “San Marcos” (St. Mark), displaced over 800-tons and was around 180 feet long. She carried 33-Heavy Cannon. Used as a Transport Ship, “San Marcos” also carried 300 Spanish soldiers to be used on the invasion. Her normal complement of Officers and Crew was 117. As a “Front Line” Command Ship, “San Marcos” received intense fire from both British Warships, as well as almost being lost to an English “Fire Boat”. Heavily damaged, she had to break off the fight in The English Channel and try to make for deep water. She began to founder off the Coast of Ireland, and sank – with much loss of life to the invasion troops (over 200 lost). 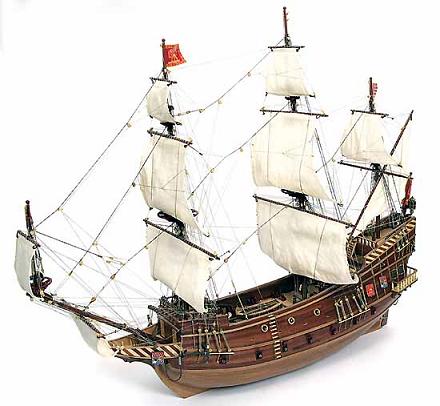