With their probable creation during Spain and Portugal's Military Campaigns to retake lost Territory to Muslim Occupation  (The Reconquista Period), these mostly Infantry Forces, were heavily Armored Troops. Seen around the 10th Century, and reaching their apex in the 16th - The Conquistadors were pressed into Service as the :Military Arm" of Spain's "Age of Exploration" to "The New World".

Officers were of Noble background, with the more Common "Rank and File" being in their Command. Seen as Colonial Soldiers, they used various types of Armor for protection. At first, Conquistadors wore nearly full suits of Armor. These were quickly discarded due to the hot climates and almost "Jungle-like" conditions they encountered in Central and South America.

Adapting "Half Plates" (Breastplates and Backplates), they also used the now iconic "Morion" Helmet. Hard (or Boiled) Leather was also quickly adopted. Conquistadors became adept with the deployment of early Firearms, seen as a major contributing factor with their "Conquests". Sword and Dagger were seen as secondary weapons. Coupled with their use of Horses and Artillery,  The Conquistadors would eventually overwhelm The Aztec and Incan Empires. They would go on to establish a strong Spanish presence in The New World, for many Centuries. 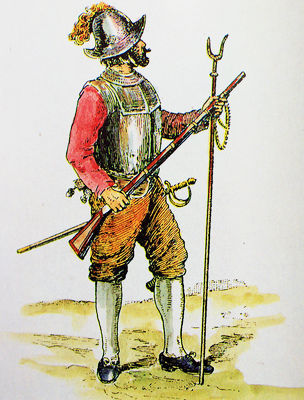