"Spanish" Breeches were an early form of Men's clothing, developed in the 16th Century, and popularized in Spain. They were possibly designed for Military use, they were adopted by Nobility. Short and baggy, they were made oversized and heavily stiffened with natural starches to get their voluminous appearance. They were cut from at first Linen (pattern), with felt or silk applied (outer skin). Colors and well as decorations (embellishments), could be elaborate. Somewhat "ridiculed" in France and England, nonetheless, a form of these Breeches were adapted for wear. The Spanish Breeches style would remain in use until The 17th Century. 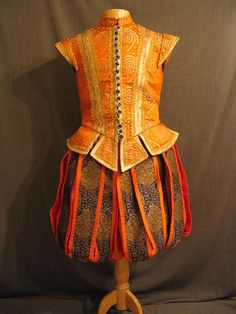