Developed as early as the 6th Century (and based in part on Roman designs), the Spangenhelm continued onwards to the 13th Century. Coming from Germanic origins, it was composed of 3 to 6 steel or bronze component pieces. The pieces were formed into a conical shape. Some versions may have incorporated the “new” Nasal plate - as well as side facial plates (which were hinged in place). These side plates were initially speculated as being made of hard leather. Other variations may have also included a front metal “eye glasses” shaped metal extension (from the front), as a form of early eye and upper face protection. A weakness of the Spangenhelm was that it's multi-components could give way under a hard blow (sufficient to cause a split in it's joints). 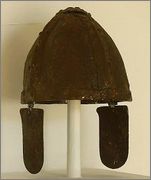