Developed in Medieval Russia around the 12th Century, The Sovnya was similar to the French Glaive. Mounted on a wooden pole (roughly 12 to 18 feet long), the weapon featured a 12 to 18-inch sharpened steel blade at it's end. The tip flanged and tapered upwards to feature 2 additional cutting zones. Single-edged, The Sovnya was favored by Cossacks and Light Cavalry Units. Many Muscovite Guard Troops used this weapon and it was favored for it's deadly agility in the hands of a trained user. The Sovnya Sword Staff continued well into the 17th Century. 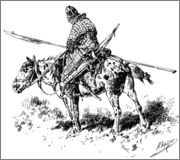