The World’s first Cantilever wing design (used to reduce force stress on wing configurations), The Soviet Tupolev TB-3 was a Heavy Bomber produced in the 1930s and was used through World War II. It set the World’s first endurance flight of staying airborne for over 18-hours. An all-metal design, much of The TB-3 design came from various German Heavy Bomber designs. The Heavy Bomber saw operational history during The Battle of Smolensk, Moscow, Stalingrad and Leningrad. Although operational losses were great, 10 of The TB-3 did survive until the end of The War in 1945. When configurated for Transport, The “Ant” could carry up to 26,000-pounds of Material. 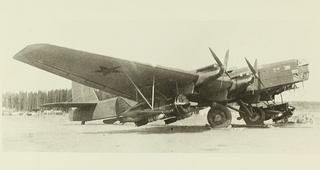