The Soviet Polikarpov Po-2 was an early Military Training Plane used by The Soviet Union, first flown in 1929. Nicknamed ''The Mule'', The Po-2 was a Bi-Winged Aircraft used to train Soviet Pilots. So popular and reliable, over 40,000 Production Models were made. Despite their obvious age and ineffectiveness in ''Modern'' Combat (with regards to World War II), The Po-2 would serve against The Germans as a Multi-Role Aircraft for Artillery Spotting, Troop Observation and even Ground Support ''Fighter''. The Po-2 would remain a Trainer with The Soviet Air Force (and others) as late as 1959. Piloted by (2), The Po-2 was 27-feet in length with a Bi-Wingspan of 38-feet. Power was provided from a Single Shvetsov 5-Cylinder Engine, capable of 125-HP. Rated airspeed was to 95-mph with an operational ceiling of 9,000-feet. The Po-2 could support (1) 7.62mm Machine Gun or carry up to 110-lbs. of Munitions. 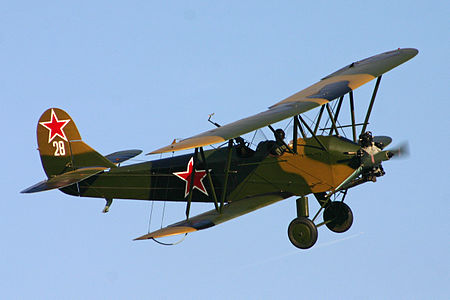