Named for Vladimir Lenin (Founder of The October Revolution in Russia, that established Communism as the dominate Political System over The Monarchy), The Order was the highest Award issued by The Soviet Army during World War II. First created in 1930. The Award also merited the Title of "Hero of The Soviet People". Later, after 1944 - Civilians were issued The Medal for outstanding acts in "preservation of The Soviet Union and it's ideals". Four design patterns were created (the last in 1943). Over 400,000 were given until the dissolution of The Soviet Union in 1991. Over 36,000 of them were awarded in World War II  (most if which were posthumously).

Designed as a cloth Ribbon of Orange-Red blend, this was bordered in Yellow Stripes. Patterned in the Soviet "inverted" design (broader at the bottom). The Medal was a circular pattern in Gold. The Silver Center bore the partial relief of Lenin. The Soviet Party Symbolism of The "Hammer and Sickle" (Industry and Agriculture), are present in Red enamel. The Awardee's name was normally engraved on the rear of The Medal. 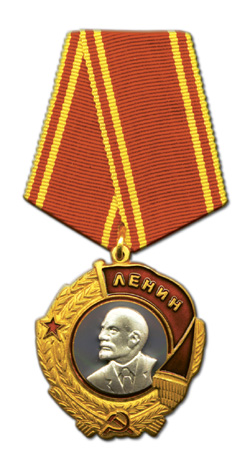