The ''Nakhimov Medal'' was a Medal of Military Award, given to Sailors and Officers of The former Soviet Navy. It was a World War II created award, of which over 14,000 were issued. The Medal was named in honor of Admiral Nakhimov, who commanded both Imperial Russian Land and Naval Forces at The Siege of Sevastopol – during The Crimean War of the 1850s. The Medal was created in 1944 to honor those Soviet Naval Personnel who ''defended (living and dead), The Coastal Regions of The Soviet Union'' against German attack. The Medal was a Gold colored device, which on The Front had the profile image of Admiral Nekhimov (in 19th Century Field Uniform). His Rank and Name are inscribed, as is a small Wreath of Honor – bearing the Soviet ''Star'' insignia.

The Ribbon color (for The Medal) was originally Grey with (3) Vertical White Stripes. A later 1960s forward Ribbon Version featured a Dark Blue Ribbon Field with (3) Vertical Stripes. The Rear of The Medal bears (in Russian) the phrase ''FOR BATTLE MERIT''. It was one of the few Soviet Medals recognized by The Russian Federation (after the demise of The Soviet Union), in 1992. It would be retained for 2 more years. It is no longer issued. 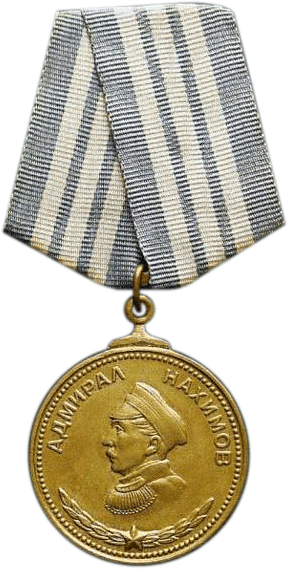