The Soviet MIG-25 ''Foxbat'' was a Cold War Era Fighter-Interceptor that was rated as among one of the fastest Fighters in The World. Capable of airspeeds of Mach 2.8, The MIG-25 could achieve slightly over Mach 3. Widely produced in 1970, nearly 1,200 Models were deployed with The Soviet Air Force and it's Allies. The ''Foxbat'' was made known more ''intimately'' by Western Intelligence, when a Soviet Pilot defected in 1976. Despite this, The MIG-25 would remain in service until 1984, before it was retired. Flown by (1), The MIG-25 was 80-feet long with a fixed wingspan of 45-feet. Power was provided by (2) Tumansky Turbojets which produced 16,200-IBF of Thrust. Conventional operational airspeed was rated to 1,900-mph at Mach 2. The operational ceiling was 67,000-feet. The ''Foxbat'' deployed a wide variety of AA and SA Missile Platforms – but were never designed for tactical nuclear devices. 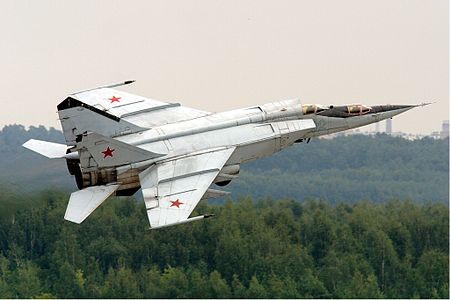