Revolutionary in design and inception, The Polikarpov I-16 was a single-seat Fighter Plane nicknamed “The Donkey” for its’ smaller than normal and squat appearance. First constructed in 1934, The I-16 was an advanced Fighter designed in part from the popular Gee Bee RI (“GB”) Racing Plane. It’s design was envisioned to produce a fast attack Plane which was more maneuverable than traditional Fighters of The Era. The I-16 was cheaper to manufacture. It’s speed was linked to a mostly fabric covered wing and aluminum frame. No less than 28 variants of The I-16 were produced by Russia and China. Most future “Eastern Block: Countries adapted a form of I-16 as a primary Fighter and Trainer. Nationalist Spain still used a variant as late as 1952.

Nazi Germany was impressed with the design and adapted a I-16 version (known as The “Type 24”, which were in reality captured Fighters). 20-feet in length with a wingspan measuring 30-feet, The I-16 used a Shvetsov Supercharged Air cooled radial Engine – capable of 1,100-HP. Her airspeed was 325-mph. The operational ceiling for The I-16 was 31,000-feet. A typical armament package was (2) 7.62mm Wing mounted Machine Guns, (2) Wing mounted 20mm Cannon and the ability to carry 1,000-pounds of Ordnance or Rockets (Air to Ground). The I-16 was a popular Fighter sold to Nationalist Forces under France during The Spanish Civil War of the 1930s. 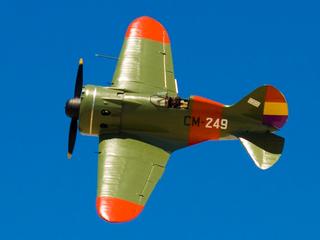