The Soviet developed FAB-5000 was one of the largest and most powerful munitions used by The Soviet Military in World War II. The casing was a metal alloy and was designed to be used against Germany's War effort – in particular factories and related infrastructures. Weighing 11,000-pounds, The FAB was 9-feet long with a 25-inch diameter. It used over 7,000-pounds of explosive, consisting of TNT, RDX and Aluminum Powder. As such, craters of over 20-feet in diameter could be produced. However, due to it;s massive size, Soviet Bombers tasked with The FAB deployment could not entirely close their bomb bay doors. (98) FABs were produced for The Soviet Air Force, with first deployment in 1943. An attack on Konigsberg (Old Prussia) and it's coastal fortifications, caused maximum damage. Effective, The FAB would remain a staple of Soviet munitions until 1949. 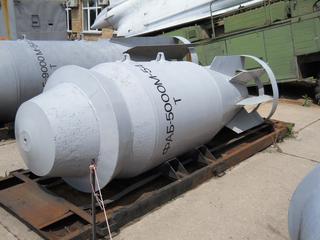