As we have seen, animals have been a part of "Human" warfare for many Centuries. In many ways, innovative (if not morbid) - methods had been developed to fully exploit them effectively. "Rocket Cats", "Fire Pigs" or dead and decomposing carcasses are just several examples. Even by World War II, such "innovations" came into use. With Germany's Invasion  of Russian (1941), a poorly equipped (but nonetheless) determined Soviet Army used any tactic to expel The German's from "The Motherland".

Herein enters the use of Canines for an unorthodox military tactic. Using smaller breeds of Dogs, Russians would purposely starve the animals and train them to seek food which was fed to them by Tank Crews. Using the Emergency under carriage Escape Hatch, a Tanker would hold the Dog's food out until the animal came to take it. The animal associated his "meal" with the under carriage of the Vehicle.

Phase 2. Timed fuse explosive charges would be strapped to the back of the unfortunate animal. When German Panzer Tanks were operating in an Area, our "Bomb Dogs" were released - heading straight for The Tank (with the predictable outcome shortly coming). The tactic was also used against Infantry. What lonely Soldier would not take a "pet"? Eventually, German Troops were under Orders to immediately shoot any stray Dogs seen (to either prevent them being a Bomb or used as one). 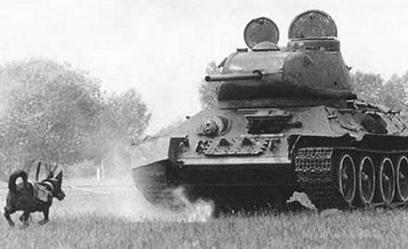