While War can lead to amazing innovations which when deployed, could and did win Battles and in some cases War, some attempts – while noteworthy, were extremely ineffective for their Combat needs. One such attempt that was somewhat envisioned was by The Soviet Russian Army in World War II. Noted for their dogged determination to resist German Occupation, they developed many weapons and tactics that would become standard for future World Armies. By the start of German hostilities, The Soviets had a very small, almost non-existent Air Force. It was built gradually (which much help from American and Britain). This small Force was needed to counter the juggernaut that was Hitler’s Luftwaffe. In another “arena” German Armor was far superior to many Nations. Bigger and more powerful – often these Divisions could easily “turn the tide” of a Battle. Soviet Designer Oleg Antonov began to design the vest of both World’s, by combine both a small “Light” Tank with that of a proposed multi-engine Aircraft. This vehicle would be in essence, a “Flying Tank”, capable to low to moderate level flight and the farther abilities to immediately deploy Light Armor very quickly – and assumedly anywhere.

Attempts as far back as 1935 were achieve with varying levels of success. These “Tank Planes” were actually “strapped” underneath traditional Heavy Bombers. They would be “dropped” via Parachute to the desired location of deployment. Of course, first attempt at prototypes found Antonnov’s Plane far to heavy to support even a light 2-ton Tank (let alone the ability to maintain required altitude). It was then planned to shave down the weight of The Tank and create a Glider System around this. This was “born” The Soviet A-40 “Tank Wings”. The theory was to create a re-usable “skin” with attached framed wings. This “body” was attached for flight and then upon landing, taken off by awaiting ground crews.

A (2) Man Crew was envisioned. The secondary Flight Skin could support 1 Light Tank or 17,000-pounds of fully loaded Armor. The Plane body was 40-foot long with a wingspan of 60-feet. With the switched plan of a Glider System, no propulsion/Engine was needed. Although the first “Combat” test in 1942 did work, the common issue with The A-40 was finding a strong enough Aircraft to pull it in flight until it’s deployment range and self-flight. Another drawback was that other than the Pilot and Co-Pilot, the Crew of The Tank had to travel separately. All these were taken into the fact that it would take too much time to effectively deploy The A-40 effectively. 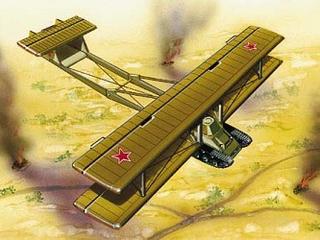