The South Korean made KAI KF-21 Boramae Fighter Jet, is considered a 4.5th Generation Fighter. To be tested in 2022, full Production will begin in 2016. The KF-21 is seen as a close air support Fighter capable of other multi-purpose functions. Indonesia will also place orders for The KF-21 for Their Air Force. Superior in many ways, it will easily outclass any North Korean Air Force Fighter, and also be quite effective in close combat with many Chinese Fighters as well. The Prototype carries (2). Overall length is 55-feet with a fixed wingspan of 37-feet. Power is provided by Twin General Electric Afterburning Turbofans, capable of producing 13,000-IBF of Thrust. Speed is rated to Mach 1.8. Operational Ceiling is close to 50,000-feet. The KF-21 will support a wide variety of Avionics and AA /AS Missiles and Rockets. 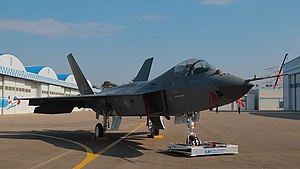