Snow Classes of ships were prevalent from the 17th thru 19th Centuries throughout Europe. Twin Masted, Snow's were multi-purpose ships that were used heavily in cargo transports. Many Snow-Class ships were pressed into The Slave Trade, as well. Between 400 to 800 tons displaced, a Snow could crew between 30 and 50 men. They seldom reached beyond 60 feet in length. They were obviously popular with many Pirates and Privateers (as both targets and attack vessels). 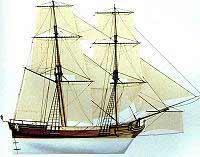