As has been previously discussed with Medieval Garments such as The Brittany Hood and related items, the 14th Century Snood was very similar in usage. A popular form of device used by women to control their hair from being "free flowing", they appeared in France and spread throughout most Kingdoms. Made of string or heavy yarn, The Snood was a bag-like construction, featuring a "net like" appearance. Often embellished with precious and semi-precious stones (such as Pearl), it became a standard and indispensable piece of a woman's clothing.

The common reasoning for wearing The Snood, arose out of the Medieval perception of a woman's hair. Children and unmarried girls were allowed to wear their hair "freely". However, as was both a Religious and Social norm, a married woman or Mother (even a Midwife), was expected to have their hair worn up at all times  (or cut and concealed).

The Snood allowed for Piety Regulations to be observed, all the while providing a sense of "fashion". Some Snoods were quite elaborate and were seen popular in both Spain and Italy well into the 17th Century. The style is still emulated today, with The Snoops ancestor - The Hair Net. Conversely, a "Male" version of The Snood, was known to be employed. These were "Beard" Snoods. These components however were seldom worn in Public. 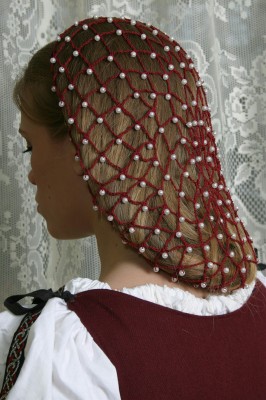