The Small Sword was designed in the mid-17th Century, as a one-handed weapon made for thrusting. Normally, the blade was not sharped - but featured a point. Thought to have been developed in France, The Small Sword was an ancestor to The Fencing Sword. It could have been used as a dueling weapon in it's own right. The Small Sword became a standard weapon for most Infantry Officers throughout the world (in some variation). The sword hilt is normally in a "shell pattern" and is slightly  concaved. This attachment also helped secured the blade to it's scabbard. Blades were around 24 to 33 inches long. They weighted 1.5 to 2 pounds.  The handles were often quite elaborate and feature the "D" hand guard. The Small Sword also had a notch pommel which could be used as a striking weapon. This sword is still used (in some forms) as a ceremonial Officer and Non-Commissioned Officers Ceremonial blade. 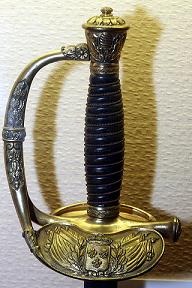