In yet another variation of headgear worn by American Civil War Armies, The so-named “Slouch” Hat was a popular late War style. As we have seen with The Hardee Hat, this was the principle full dress Uniform Hat worn by The US Army in the mid-1850s to the early 1860s. Made of stiffened Felt (and blocked), it was soon seen that they did not stand up to repeated exposure of The Elements. Somewhat impractical for warfare, they were quickly replaced by The French styled Kepi Cap. Officers retained a Stetson Hat for their full and everyday Uniform dress. But even these “higher” quality Hats were more match to the rigors of combat. In both cases, the Hats would wear badly and “fall” into disrepair and presented an “unsoldierly” appearance. Despite the ability to replace them, most Federal Soldiers preferred to wear them (as a sign of their “Veteran” status). They became known and called by Soldiers as “Slouches”. The name has come to mean “slovenly and unkempt”. The Confederate Army adopted the style early, more so out of supply necessity than anything else. Much like the iconic “Bummer”, The “Slouch” became a “signature” (of sorts), for such legendary Civil War Generals as Grant, Sherman, Longstreet and Hood. 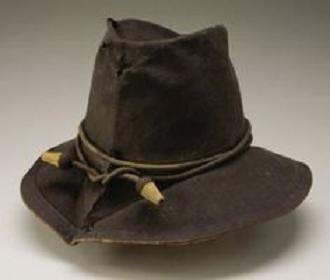