Soldiers from around The World and throughout History, have told if their "trials" with their Rations, throughout both War and Peace. As we have discussed with the infamous "Cracker" known as "Hardtack", a Soldiers food on the 19th Century was often terrible. This was due to storage and preparation. Still, a good Soldier knew how to forage and adapt other sources to supplement his "fare". One form of this was the "bread" called "Sloosh" (by Union Soldiers) and "Ramrod Bread" by their Rebel Counterparts. eaten widely during the end of The American War Between The States", it was made from Flour and water (two things that were not in general short supply).

Flour, water (and a little salt) was mixed together into a type of dough. This was rolled into long serpentine pieces of 8 to 12-inches in length. The dough was "spiral rolled" around a stick or Rifle Ramrod and placed above a Campfire to "roast". between 10 and 20-minutes later, "Sloosh" was ready to be consumed. In the rare cases of meat being available, often "Sloosh" was rolled around in the animal grease (fat), and clicked again  (to add flavor). "Sloosh" was made more popular with The Confederate Armies, due to their dwindling food supplies. it is still made today in some parts of The American South (albeit minus the Ramrod!) 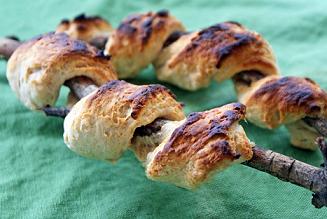