A fashion technique of the late Middle Ages and early Renaissance Period, "Slashing" may have developed on the battlefields of Europe. First mentioned in the 14th Century among Flemish and Swiss soldiers, the practice derived from combat, in which one's Clothing was "slashed" by an Opponent's Sword or Pole Arm. Hopefully surviving such a strike, the "slash" was seen as a "Badge of Honor" (and left in place). Another form of related "Slashing", involved Burgundian Soldiers, who - after "slashing", took captured fine cloths and silks to patch the combat slashes. Conversely, these pieces may have been worn underneath the clothing. With the added slashes, the undergarment was seen. Thus was born - of battle, a new "fashion style". Clothing, especially among Nobility - began to be purposely manufactured with slashes, to reveal the finer silk and linen under garments. The style was used to accent sleeves, Surcoats and Pantaloons. The practice of Slashing would be dominate throughout Europe well into the early 18th Century. Amazingly, the practice has been revisited of late, in Modern fashion. 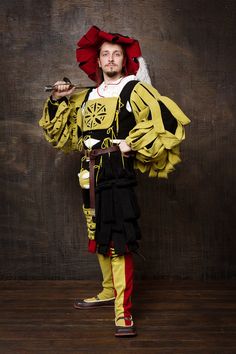