What would become a somewhat iconic image associated with Medieval fashion, The Skull Coif was born out of two theories, one of which was for health. Seen in use by both sexes in the 13th Century forward, The Coif was made of muslin. Designed to be form fitting, it covered the entirety of the head of the wearer. Complete covering all hair, The Coif extended over the ears, and was tied under the chin. It served the religious obligation of covering one's head in reverence to God, which was a common practice of the pious in The Middle Ages. The Skull Coif was worn with a myriad of different Hat styles and designs. Secondly, The Coif served a health need that plagued both Noble and Commoner - mainly insects. Lice, Fleas and Ticks were a common problem among the masses. The Coif helped to keep insect life from infestation (mostly). Originally only worn exposed when in private, The Skull Coif would go on to evolve into other well known  (and similarly used) headwear such as The Puritan Cap (worn almost exclusively by females), and of course the Sleeping Cap. The Skull Coif ceased (in it's original form) for use around the late 17th Century. 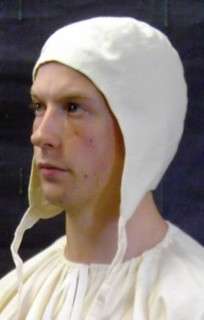