Although dating to perhaps Ancient Egypt (3,300 BC), ''Skittles'' were a popular outdoor game played by both Commoner and Noble alike during Britain's Tudor Era (16th to 17th Centuries AD). Basically ''Outdoor Lawn Bowling'', the Game involves a series of wooden Pin with Head-like tops. A wooden ball is used to knock over a ''declared'' Pin or series of such. One must knock over the declared Pin with successive strikes done the same to win. There are many variations of Skittles, depending on where they are played. A variation is also played indoors (Pubs and Taverns).

A Skittle Pin is normally 12 to 15-inches in height. They are not normally painted, but some Tudor examples were known to be. Balls were plain wood. Often these games were bet upon (again by both Noble and Commoners). The betting became so heated, that for a period, Skittles were banned in many Villages. The game is still played today in England and other European Countries. 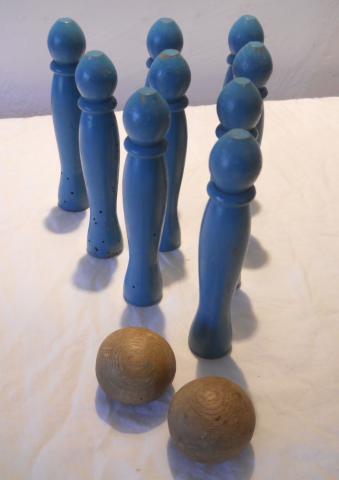