The Position of "Skirmisher", is as old as organized Warfare. These were Infantry Soldiers (with no specific specialized training). They would be deployed far ahead of a traditional formed lines of Soldiers or "fixed" Position. They were aligned in standard Line Formation, but somewhat modified. Normally, spacing was between 15 to 20 feet in interval  (although even this has been refined over the generations). The goal of The Skirmisher was to probe an Enemies (or suspected) - Enemy Position.They would look for weakness in such Defenses by "harassing" Tactics. The Skirmisher became quite adept in "cover and concealment" techniques.

In Ancient Warfare up to The Middle Ages, Spearman and Archers held these Positions. Soon, Crossbowmen and eventually Riflemen would dominate. With the deployment of Cavalry, most Skirmishing by Inantry was replaced on European battlefields. Cavalry were able to faster assess an Enemies defenses and report that information back to Field Commanders. By the 18th thru 19th Centuries, the use of traditional Infantry Skirmishers became the norm again. A classic example was in America's Civil War. Both sides in The War made maximum use of these types of Soldiers and tactics. In fact many Major battles "began" as a result of Skirmish "encounters". The term "Skirmish" (or "Small Battle"), would result from this. Skirmishers could also be used as Rearguards to protect a retreating Army and even as Sentries, if needed. Their tactics and deployment are still taught and used by many Modern Armies, even today. 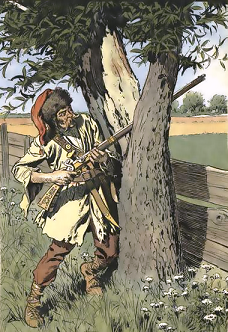