Sistrum were considered pre-Percussion musical instruments used in Ancient Rome. They were used mostly in Ceremonial Processions  (such as Triumphant Entries of victorious Military Commanders). Made of pressed Brass or Bronze, they could be either cylindrical or squared. Placed on wooden or metal hand-held poles, these could be several feet to 6-feet in length. The internal component of The Sistrum were placed inside it's hollow inside. These could be small shards of metal, glass and even pebbles. In operation, one simply shook the Sustrum repeatedly to produce a "tingle-type" tone. Later, actually small bells were installed, which produced a "ringing" tone. Used in concert with other instruments such as The Lituura, Buccina and Tuba, Sistrums were used throughout The late Kingdom to The Imperial Eras. 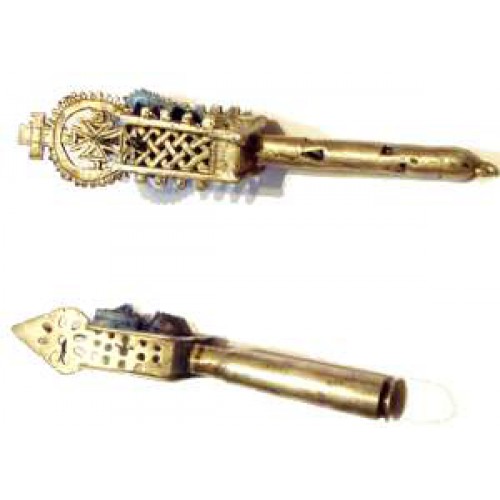