The design of Siege Towers and their implementation goes back to the 4th Century. Considered specialized equipment, they were made to protect troops approaching an enemy defensive wall or fortification. Often rectangular in shape, they had 4 wheels. Their height was often equal to the height of the wall needing to be overtaken. In some cases, the Siege Tower was slightly taller, to allow archers or other "missile" troops to fire downward or over a wall more effectively. Initial designs have Siege Towers made of wood. This was problematic. Fire was a main issue to the Siege Tower. As designs were perfected, iron and steel plating was incorporated onto their sides as was thick layers of animal hide. Due to the time and expense in build one, they were often used as a last resort - falling second to battering rams and under-mining of walls.

The primary goal of the Siege Tower was to provide a method to get one's troops inside an enemies Castle by going over the walls. To achieve this, gang-planks and walk-way drops were incorporated on the top (or second levels). This allowed the troops to cross over onto the enemies walls and towers. With the advent of artillery, the Siege Tower again became a problematic fixture. At some point, cannon were built into the Siege Tower (on various levels). This created a "gun platform" of sorts. One documented Siege/Artillery Tower sported 50 guns. Adding even more protective armor however, slowed and even stopped their mobility factor. Larger shells (and bigger field pieces) would eventually spell the end to the Siege Tower. 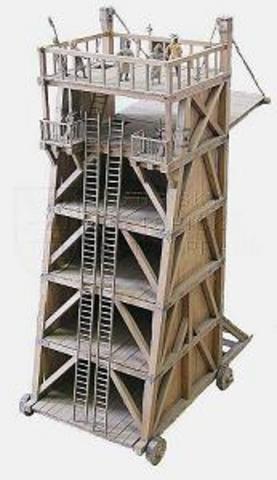