An innovative design of Military Campware, The Sibley Tent was designed in 1856 by US Army Officer Henry Sibley. Sibley based his design on both The British “Bell” Tent and The Tipi of Native American fame. Sibley had served on The American Frontier and had been impressed with the overall durability and relative ease in erection of The Tipi. Coupled with his further observations in The Crimea War with The Bell Tent, Sibley came up with his design.

The Sibley Tent was made of lightweight Canvas, and was Conical in shape and stood 12-feet tall. It’s base was 18 to 25-feet in circumference (there were small and large versions available). The base was held in foundation  by a series of 15 to 24 pre-arranged wooden pegs or spikes. The Sibley required no Guy Ropes, hence the link to it’s innovation.

The innovation came with the interior of The Sibley. An attached expanding interior frame skeleton, allowed for a Soldier to erect The Sibley with several easy moves. The general shape and form of a Cone came from this. Special openings in the side, allowed for a Stove to be placed for heating and cooking. Normally a Sibley Tent could accommodate an Infantry Squad (or 8 to 12 Men, depending on the size of The Sibley). It was easy to store and transport The Sibley Tent.

Sibley received a Patent in 1858 for his designs and was awarded a contract by The US Army to receive $5.00 per Tent. With the start of The American Civil War, Sibley sided with The  Confederacy. He survived The War, and tried unsuccessfully to sue The Federal Government for monies owed (he received none for the 2-year prior to The War, as well). It is estimated The US Army fielded over 44,000 Sibley Tents during The War. Even after Sibley’s death in 1886, his Family failed to persuade The Government to “make good”. The Sibley design would be seen up to the end of The Spanish-American War in 1898. 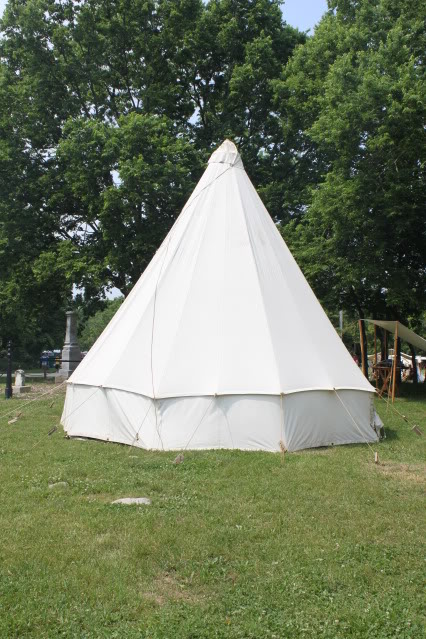