The Tashtyk Culture was another Bronze Age Siberian (Russian) Society which flourished around the 4th Century BC. These peoples lived off the apex of several major River systems. As such they were prolific traders. They had a highly complex funerary belief and were also noted craftsmen. Due to their trading, they also became ready targets for Enemy and Rival Clans. As such they too developed a Warrior Caste, which was not a standing Army – but more similar to 19th Century AD Militias. It is assumed that these Warriors were in reality local men who could be called up by Tribal Leaders when a threat developed.

The Tashtyk used a form of formed plate wrapping seen in the late Byzantine Warrior Culture. Small and thin iron plating was sewn together to form larger quilted plated. These were worn around the waist and leg (almost extending to the ground). They were joined to the body of the Warrior by a series of leather straps. A similar wear style was used around the chest and arms. Often a Thorax ''outer plate'' was used to lessen blunt force trauma to the body. The Tashtyk also used a more traditional Helmet (solid bronze), which covered the upper head and sides. They were also a horse and Bow Culture, relying of these early ranged weapons deployed in volley. They also adopted an early form of full body Pavise Shield. 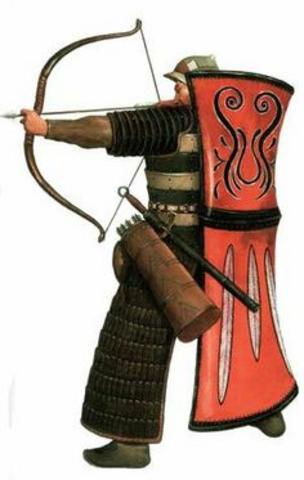