While the term is somewhat self-explanatory, the 19th Century Occupation of ''Shotgun Messenger'' was an important part of protection with regards to Persons and Cargo – in The American West. It was often a dangerous position while paid very little. While the act of protecting goods was not new, the procedures greatly developed and were refined, due to increased activity by Outlaws and Bandits.

The Wells Fargo Company was an American business concern which specialized in the shipping of goods overland. Prior to this, the most common and used way of transporting such was by Ship. However, if shipping came from The American East Coast to West Coast – it could take many months to achieve. The same was true if goods were needed in the Middle of The Country (which was much more difficult due to the lake of Shipping Ports!). The Wells Fargo Company began to remedy this by using The Stagecoach System of transportation to move much needed goods.

When Wells Fargo moved into the Banking and Financial Services Business, Stagecoach travel became just as viable. Moving monies (and gold), became very attractive to Robbers. Often, only a lone Stage Driver armed with Pistols was all that stood in the way of a robbery. Enter the Position of ''Shotgun Messenger''.

These hardy and brave men were in essence Guards hired by The Wells Fargo Company, with the sole mission of protecting the goods being transported via a particular Stage. Although these men were armed ''to the teeth'' (mostly with two or three handguns), they began to favor a hand weapon which provided more ''firepower'' - namely The Shotgun.

The Shotgun was traditionally a long barreled firearm featuring a large bore known as a ''Gauge'' (being a larger unit of bore measurement than a ''Caliber''). These firearms could fire either a single large lead shot or be adjusted via a ''Choke'' on the barrel – to fire multiple, pellet like shots. Although a single barrel was available, most Messengers preferred the ''Double Barrel'' version, which produced more damage and provided the Shooter with multiple shots. In many cases, these barrels were sawed down to make the use and carry of the weapon more effective (especially in the often cramped or constantly moving Stage). This practice gave way to the term ''Sawed Off''.

In a related note, the oft used ''Modern'' phrase of ''Riding Shotgun'' is often associated with this American Western Occupation. It was however, an invention of The Western ''Penny Novels'' (and later Early Hollywood). The phrase was not used in The American West by or to describe ''Shotgun Messengers''.

Many Messengers lost their lives defending their ''charges'' (both monies, cargo and travelers). In most cases, (like the famed Pony Express) – most of their names are lost to History. Nonetheless, these men helped pave the way for saver means of travel thru the wild and often unpredictable American West. 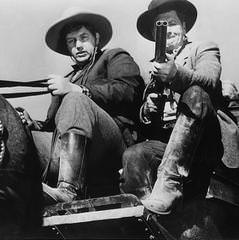