A Shield in Heraldry is divided into numerous parts. These parts are then “mapped” out with the particular images and symbols to be used in “creating” a Coat of Arms. The central position of a Shield is thus broken down into 3 components The Upper (called “The Honor Point”), the Center (called “The Fess Point”) and the Lower (called “The Nombril”). The Outer sections of a Shield also have names. The Outer Upper portion (over which one “sees”), is called “The Chief”. The Left Outer portion is known as “The Sinister” (with the Right called “The Dexter”). Finally, the Lower Outer portion (bottom point) – is called “The Base”. The “descriptors” were coined and used mostly by Armorist's to place specific symbolism in specific places (a formula, of sorts). The basic “formula” was used on Coats of Arms from the 12th Century to late 18th Century (and was applied to all “shapes” of Shields). 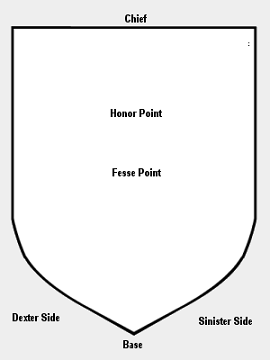